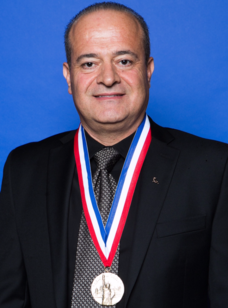 It gives us a great pride and honor to congratulate our President & CEO Mr.  George Mobassaleh for having received the “ Ellis Island Medal of Honor “  during a joyous celebration that  took place on May 13th,2017 on the Ellis Island - New York .

It’s worth mentioning that, this Medal was formerly granted to seven U.S Presidents, a few World Leaders, in addition to number of ;  Scientist , Artists , Educators , Sports Legends , Politicians and a numerous dignitaries, and has been recognized and commissioned by the House of Representatives as well as the U.S States Senates .

George,  who is known as a philanthropist, industrious and an entrepreneur,  is  one of the most distinguished CEOs in Florida , and a perseverant  who  notably contributed massively in the prosperity of the Beauty Supplies industry Statewide , he is further known as a  prominent figure amidst all Ethnicities and the local Communities for being an Equal  opportunity Employer and a  generous Community supporter .

We’re likewise honored, and quite proud of you George , we wish you an optimal health and  an ultimate ability to carry on  your ambitious mission and vision .

Congratulations , you have just made a legacy Boss.